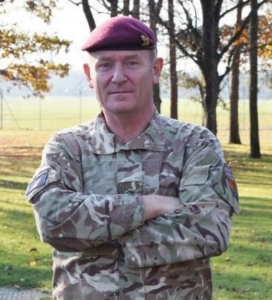 We are extremely proud to announce that Brigadier Mark P Christie OBE will be attending to talk at the English Veterans Awards.

Brigadier Christie was born in 1965 in Aldershot, Hampshire, the son of a serving Army Officer. He was educated at St John’s Beaumont and then Douai school and from there, following a gap year, he entered RMAS firstly onto Rowallan Company and then onto SMC 872 and was commissioned into the Parachute Regiment in 1987.

He completed his initial Platoon Command tour in 1 PARA (1988-89), and followed this with a tour as a Recruit Platoon Commander at Depot PARA (1990-91). From Depot PARA he became ADC to GOC 1st (UK) Armd Div in Germany in 1992, followed by a tour as a Captain Instructor on the Platoon Commanders’ Battle Course and then Officer Commanding Sniper Division, both at the School of Infantry in Warminster. He returned to Regimental Duty as Adjutant 2 PARA in 1994 before becoming OC Bruneval (Patrols) Company and then Battalion Surveillance Officer on promotion to Major.

He attended ACSC1 in 1997 before becoming SO2 G3 Trg/EPS in HQ ARRC for his initial staff appointment, switching to SO2 G3 Ops as the HQ deployed to Kosovo/Macedonia in 1999. After his staff appointment he returned again to 2 PARA as OC D Company in 2000 and then moved to 3 PARA in 2003 as Battalion 2i/c.

On promotion to Lt Col he left 3 PARA and moved for a year to become SO1 J7 Trg at PJHQ before assuming command of 1 PARA in 2005. During his command tour he took 1 PARA into the SFSG role the following year and then left in 2007 to become an Instructor on ACSC and then SO1 Campaigning at the JSCSC.

From there he moved to HQ ISAF in Kabul as an acting Colonel to become Director Combined Joint Operations Centre for nine months before assuming the appointment of AD WARDEV in the LWDG in Apr 2010.

He was posted from there to Kenya as Commander BATUK in March 2012 for two years before returning to France as ACOS Ops in the French Rapid Reaction Corps for a year.

From there he was selected for promotion and as Defence Advisor to Kenya in February 2015 and he moved to assume this appointment in October following DA training.

He was awarded the MBE in 2002 for operational service as OC D Coy 2 PARA in Afghanistan and the OBE in 2007 as CO 1 PARA for SFSG implementation.

He has been married to Clair, a qualified and practising Emergency Nurse Practitioner, since 1990 and has four children, two sets of twins, boys aged 22 and girls aged 19.

He is a fanatical but now largely aspirational rugby player, a reasonably good runner and very keen amateur archaeologist.

Meet the Judges at the English Veterans Awards

Welcome to our English Veterans Awards Winners!
Scroll to top