My primary role within the business is designing and implementing our revenue generation strategies to ensure that the businesses commercial objectives are met and ambitious growth plans are achieved.

I have seen for myself countless times how skills that have been learned within the military can be transferred to the civilian world with enormous success and I’m looking forward to seeing further examples of this as part of the judging panel. As a business we feel it is important to highlight the value and skills that ex-military personnel can bring to almost any business environment which is why we are so pleased to be involved and supporting the Welsh Veterans Awards.

I am a solicitor at Hugh James, Cardiff. I work within the military team  representing military and ex-military servicemen and women.

Whilst speaking to military and ex-military personnel on a daily basis I am all too familiar with the difficulties veterans can face when leaving service.  I wanted to join the judging panel for the Veteran Awards to celebrate veterans who have made a successful transition from military to civilian life, whilst also assisting veterans who have faced difficulties when returning to civilian life as part of my role as a solicitor

Rik Sellwood was commissioned into the Royal Corps of Signals in 1993 and served in mainland UK, Northern Ireland, Bosnia and Afghanistan.  He spent most of his time with delivering formation level communications systems and introduced a number of then leading edge IT systems to Battlegroup, Brigade and Divisional Headquarters on exercise and on operations.  The highlights of Rik’s military career were building the first permanent ISAF HQ in Kabul during the first deployment of British Troops under Op Fingal, delivering communications support in the Bosnia Theatre during the Kosovo campaign and enjoying military life travelling widely around the world. Having spent a number of years in the Defence industry working on UAVs and conducting Test and Evaluation activities, Rik is now a senior manager working for Business in Focus managing the Business Wales contract which delivers high quality business support and advice to individuals and companies across Wales.  Rik’s notable successes in this role have been supporting the creation of over 4000 new jobs in Wales over the last year and the successful creation and deployment of a number of grant funds to businesses in Wales. Rik is thrilled to be a part of this year’s awards and views this as an excellent opportunity to support fellow veterans

I am Director of Porters Estate Agents and resident Mortgage Broker. I’m really looking forward to meeting lots of deserving nominees and of course, the goat. Eager to be involved as very proud of what our armed services do for us on a daily basis. Most of which, we never hear of. This is a great opportunity for our former Military to showcase their fantastic achievements since leaving the Armed Forces.  I cant wait to hear all the amazing stories!

I am the Director of Print Inc. Embroidery & Print Services, a family run business based in the heart of South West Wales, founded and run by myself and covering a large geographic area including Llanelli, Carmarthen, Haverfordwest along with Swansea, Cardiff and Cowbridge. Print Inc. also offers an online service, which opens up the UK marketplace through courier systems. The personal connection between our clients and ourselves is really important to us, be it online or locally. I am Very pleased to be involved with Welsh and English Veterans Awards, We supply all the Print for the Veterans Awards and we also have close links with the 1st Battalion Welsh Guards providing all their tour T Shirts and embroidery and Printed Clothing! I  am really looking forward to sharing the evening with some true heroes

ABF The Soldiers’ Charity are thrilled to partner with the Veterans Awards.  The Charity exits to give a lifetime of support to soldiers and veterans from the British Army, and their immediate families, when they are in need. We make grants to individuals through their Regiments and Corps and support a wide range of specialist charities that sustain the British Army ‘family’, both at home and around the world.

We take pride in being responsive, making a difference at a critical point in people’s lives. We have been doing this since 1944, working with veterans of every conflict, and we envisage continuing doing so for the ‘long haul’ – supporting all future generations of our soldiers and their dependants.

My role is to provide support to the Regional Director, raising awareness of our cause to military, civilian and business personnel; to facilitate others who wish to fundraise on our behalf and run our own events in Wales.  It is a crucial task maintaining and gaining new supporters, something we are very passionate about.  In the last three years, within the Wales region, we have increased military and corporate involvement two-fold.

Coming from a service family and married to a veteran who I accompanied overseas, and working in the military environment has given me first-hand experience of seeing the aspirations and successes of service leavers, also how some soldiers and their immediate families initially find it difficult.  On behalf of ABF The Soldiers’ Charity I am looking forward to celebrating those success stories that will inspire others, and to support the military community. 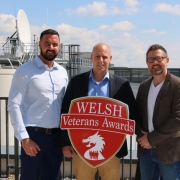 May 20th saw the Production Company Leek and Potato film our amazing shortlisted finalists over looking The Welsh National Stadium in Cardiff Central!

It was a true honour for our team to meet our shortlisted Finalists for the Welsh Veterans Awards in support of the ABF The Soldiers’ Charity Wales.  During the morning the all shortlisted nominees were issued with their finalist certificates by the Awards founder Mr Sean Molino.

All our team can’t wait to hear about your inspiring journeys on the evening itself!

Huge thanks to all the amazing team at Hugh James for facilitating the filming who are also our sponsors and the fantastic production company Leek and Potato Productions.

Keep an eye out for the finalist videos that will hit your screens during June!

The Veterans Awards are proud to announce our shortlisted Finalists for this years Welsh Veterans Awards, due to be held at the Village Hotel and Leisure Club Swansea on 26th June 2019. Sponsored by TASC Holdings Ltd and in Support of The ABF The Soldiers’ Charity!

Well done to everyone who have been shortlisted as finalists, we had a huge amount of applications and the shortlisting process was extremely difficult. We would also like to take this opportunity to thank everyone who put forward nominations.

The Winners will be chosen by our independent Judging Panel, The names of our judges will be released over the coming weeks.

All our Shortlisted Finalists will have the opportunity to purchase tickets between 7th May  – 13th May. If we have any remaining tickets left they will then go on sale to the General public.

For more details please get in touch via our Contact US page!